Teachable moments occur often, at odd times, and indeed at inconvenient times. For some Duke University Medical Center professors, their teachable moment is proving to be highly inconvenient, to say the least and most troubling.

According to The Washington Post, the teachable moment came in an email, sent by faculty on January 26, 2019:

“Something to think about …” the subject line read.

The [email] sender was Megan Neely, an assistant professor at Duke and then-director of graduate studies in the biostatistics department. The message was addressed to all first- and second-year biostatistics graduate students at the North Carolina university.

Neely said in the email that two faculty members had visited her office earlier that day, asking for pictures of biostatistics graduate students. She said she obliged, then asked why they wanted to know.

According to Neely, her colleagues wanted to identify students they had observed “speaking Chinese (in their words, VERY LOUDLY)” while in the student lounge and study areas.

“Both faculty members replied that they wanted to write down the names so they could remember them if the students ever interviewed for an internship or asked to work with them for a master’s project,” Neely wrote.”

But the email and its problematic content did not stop there. Neely had more to say:

“Neely bolded and underlined the next part of her email:

“They were disappointed that these students were not taking the opportunity to improve their English and were being so impolite as to have a conversation that not everyone on the floor could understand.”

If the implication wasn’t clear enough — that Neely was encouraging students to speak only English or else face unseen barriers to future opportunities within the department — she spelled it out in her next paragraph:

“To international students, PLEASE PLEASE PLEASE keep these unintended consequences in mind when you choose to speak in Chinese in the building. I have no idea how hard it has been and still is for you to come to the US and have to learn in a non-native language. As such, I have the upmost [sic] respect for what you are doing. That being said, I encourage you to commit to using English 100% of the time when you are in Hock or any other professional setting.”

Neely closed her message by noting she was copying second-year biostatistics graduate students on the email “as a reminder” since they were in the process of applying for jobs.

Here is a screen shot of Neely’s emails, courtesy of The Post: 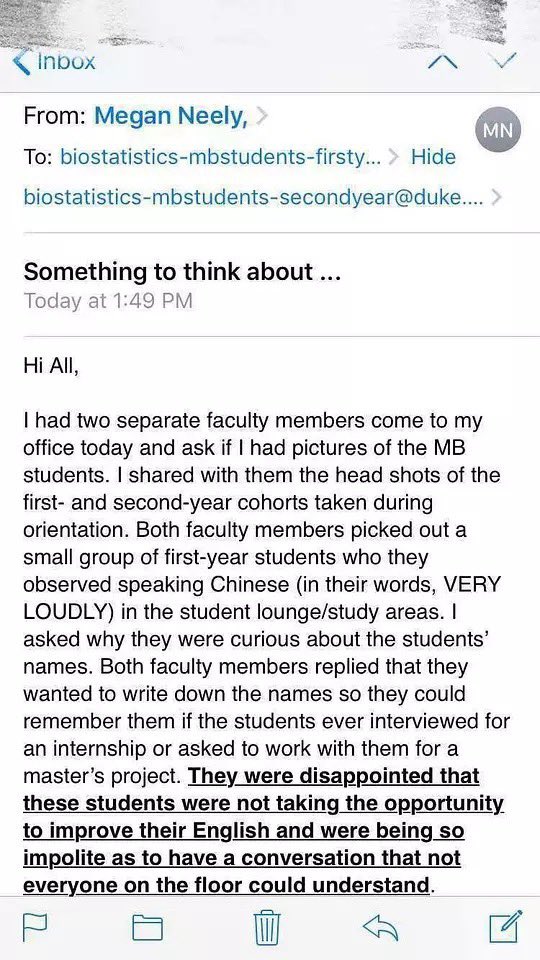 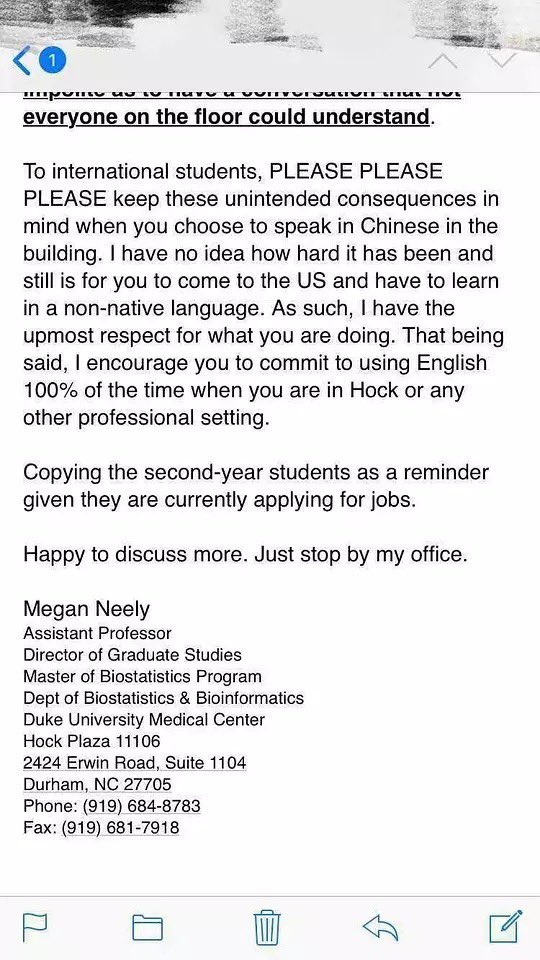 Not surprisingly, social media erupted in response, with students and others calling out Duke faculty. An email from Dean Klotman of the Medical Center announced Neely’s resignation from her position as graduate studies director of the Center’s masters’ program.

“Others accused Neely and the unnamed faculty members of racial discrimination, questioning whether the students had been targeted because they were speaking Chinese as opposed to another foreign language.

“I’m an international student. Let’s guess how many times I’ve been asked not to speak French,” one  Twitter user wrote, appending three eye-roll emoji to the message.

Mary E. Klotman, dean of the Duke University School of Medicine, emailed all biostatistics graduate students on Saturday to say Neely had “asked to step down” as director of graduate studies for the master’s program, effective immediately, and would be replaced by an interim director.

… By Sunday [January 27], news of the hubbub had spread on Weibo, a Chinese social media site similar to Twitter, with the hashtag “Duke University bans speaking Chinese” viewed more than 6.7 million times on the platform, according to the South China Morning Post.

Stateside, a petition started by “concerned students” at Duke urging the university to investigate Neely’s emails and the unnamed faculty members, had more than 1,900 signatures as of Sunday afternoon.

“We are disheartened . . . when Duke’s faculty members implied that students of diverse national origin would be punished in academic and employment opportunities for speaking in their native language outside of classroom settings,” the petition stated. “We are demoralized even more that a Duke graduate program director explicitly condones and even encourages such discriminatory practices by our faculty members.”

A Potential Pattern of Discrimination?

Of all the concerning aspects of Duke faculty comments and emails, the most egregious and legally problematic may well be an email from Neely in 2018 when she seemed to suggest specific, adverse consequences to students who speak their native languages on campus, namely: “potential downstream effects” of not getting research opportunities in the program, because faculty members would be hesitant to hire international students.”

“In the February 2018 [email] message to biostatistics students (subject line “To Speak English or To Not Speak English . . .”), Neely said faculty members were complaining about international students not speaking English in the department’s break rooms, although she did not specify the offending foreign language or languages.

“I don’t like being the language police, but I have gotten these comments enough times in the past few weeks that I feel like I should share them with you,” Neely wrote then, noting that the most recent complaint was from the department chair. “Beyond the obvious opportunity to practice and perfect your English, speaking in your native language in the department may give faculty the impression that you are not trying to improve your English skills and that you are not taking this opportunity seriously.”

She again warned that not speaking English could have the “potential downstream effects” of not getting research opportunities in the program, because faculty members would be hesitant to hire international students.”

Federal law, such as the Civil Rights Act of 1964, bars national origin discrimination by places of public accommodation and recipients of federal financial assistance. Duke University, as do virtually all U.S. colleges and universities, qualifies under both categories.

When such comments and conduct arise, swift action is necessary, including a thorough, dispassionate pattern and practice review and investigation and mandatory, effective cultural awareness & implicit bias education for all faculty members.

Simply put, our laws guarantee students freedom from national origin and language based discrimination at all colleges and universities. Different languages and cultures should be celebrated on campus and must not instead be used to threaten or sanction those whose chosen spoken words are in languages other than English.

*Read some of Bruce Adelson’s other blog posts to learn about more developments in language access law, and be sure to contact us if you’re interested in a consultation about your own organization’s compliance with federal language access law.

© Bruce L. Adelson 2019, special for Bromberg, All Rights Reserved The material herein is educational and informational only.  No legal advice is intended or conveyed.

Language Alone Is Not Enough  Client Document Portals and the Business of Translation:  A Match Made in Heaven?

2019: A Massive Year of Litigation for the Americans with Disabilities Act

This site uses Akismet to reduce spam. Learn how your comment data is processed.