FYI: Don’t Use Google Translate For Your Political Campaign

So essentially, it is truly a case of user beware when it comes to language accuracy and Google Translate. This fact is well-known to many, including the U.S. Departments of Justice and Education, Department of Health and Human Services, and federal judges.

Unfortunately, this issue has not been made known to some Democratic Party candidates who have posted Spanish-language websites about their candidacies. Indeed, an analysis by Politico reveals that some of these candidates’ websites are replete with typos and errors, some of which bear an uncanny similarity to Google translations off the websites’ English text. 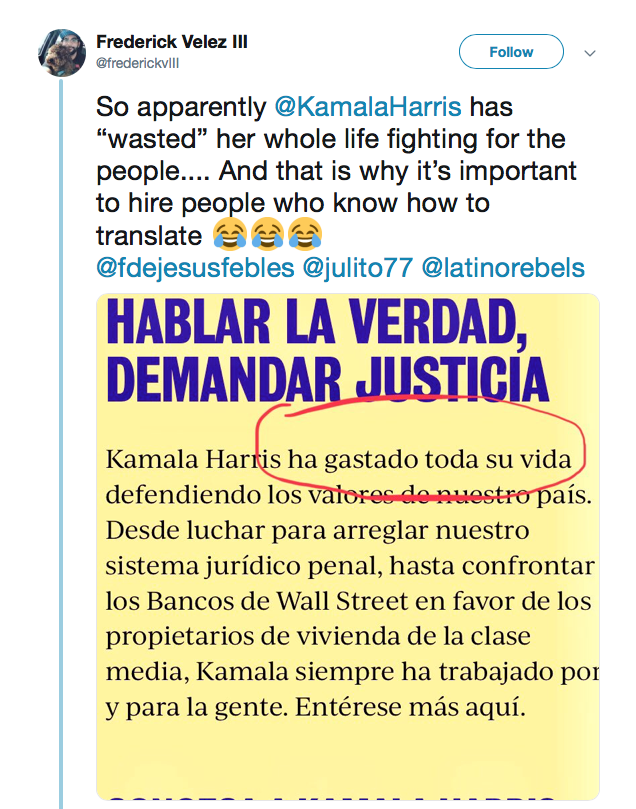 According to Politico’s March 31 report of its analysis:

“[Candidates are] posting passages in Spanish on their websites that bear striking similarities to the output from Google’s translation service, appearing to perform only minor cleanup before publishing the copy on their sites. While Google Translate can serve as a workable starting point, more often than not it needs a human hand to produce Spanish that would pass muster with a native speaker.

Every campaign site that POLITICO reviewed had mistakes, ranging from minor typos to truly incomprehensible passages. The website of Minnesota Sen. Amy Klobuchar, posted shortly after her Feb. 20 announcement, addresses her mother using a masculine adjective. Sen. Kamala Harris at one point wrote that she had “wasted” her life defending American democracy. And Julián Castro’s website extolls the possibility of building an “América” that works for everyone, seemingly not realizing that he’s making promises about the entire American continent.

POLITICO’s review looked at everything from basic grammar, to use of idioms, to how closely the text aligned with the often-poor Google-generated translation. The candidates fell into three rough categories: top of their class, average performers and the truly struggling.

Klobuchar’s Spanish website has perhaps the most egregious mistakes, leaving readers to wonder whether the text was copied and pasted straight from Google Translate.

The overwhelming majority of the main text on Klobuchar’s website is an exact match with Google Translate, causing unfortunate translations like the following, in which she says she is speaking from inside the Mississippi River. 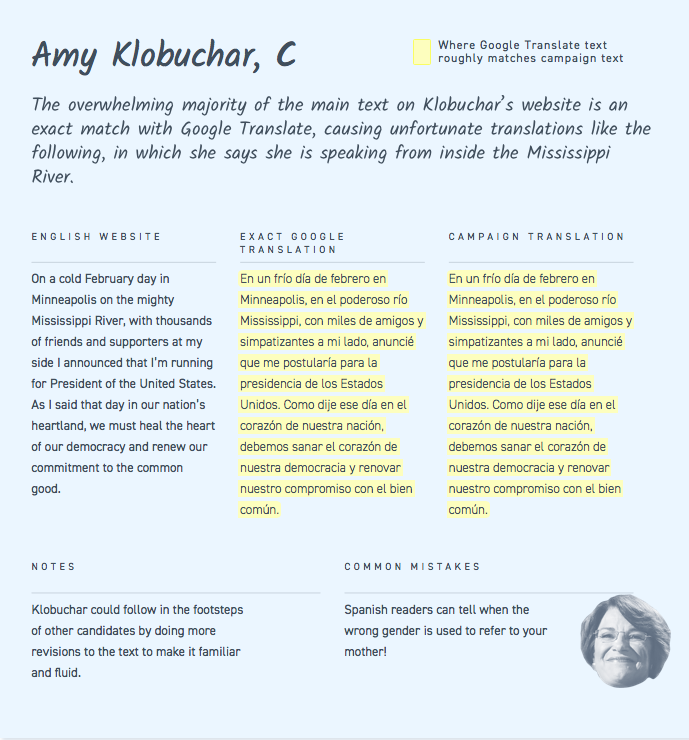 Passages on [Julian] Castro’s Spanish website also bear a close resemblance to the Google-translated text, leading to some awkward phrases.

Castro’s translation largely matches the translation generated by Google, but in his case, the sentences are coherent.” 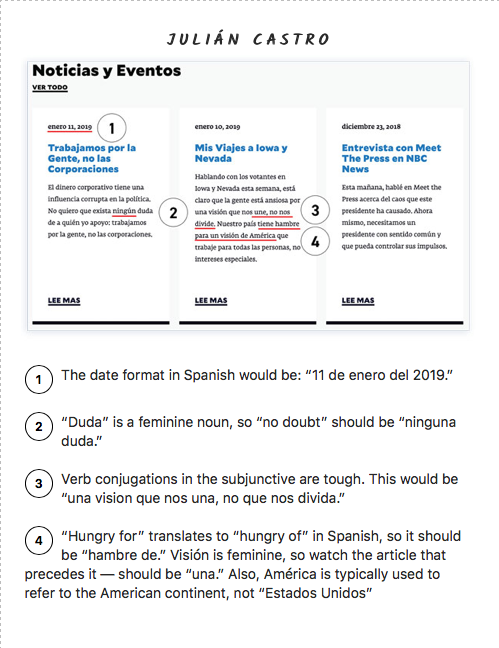 Google Translate is Not Reliable, Nor is it Constitutional…

Clearly, these candidates should mind a federal judge’s decision in 2018 that Google Translate is insufficiently reliable. In this case, U.S. District Court Judge Carlos Murguiadecided that a police officer’s use of Google Translate to translate his words seeking consent to search a car driven by a man who spoke Spanish and little or no English was unconstitutional because of Google’s translation inaccuracies.

In evaluating Google Translate for accuracy, the court reasoned that:

[An expert witness] testified that while “¿Puedo buscar el auto?” is a literally correct interpretation, it is not the question [the police officer] intended to ask defendant.

… “[W]hile it might be reasonable for an officer to use Google Translate to gather basic information such as the defendant’s name or where the defendant was travelling, the court does not believe it is reasonable to rely on the service to obtain consent to an otherwise illegal search.  And here, Wolting admitted a live interpreter would be a more reliable source for communicating with a non-English speaker and acknowledged he had other options beyond using Google Translate.

… Language barriers are relevant when determining whether consent was freely given.  United States v. Hernandez, 893 F. Supp. 952, 961 (D. Kan. 1995).  In a situation where a defendant is not fluent in the same language as the officer, the court can infer from the circumstances whether the defendant understood the officer’s questions…

For these reasons the court finds that…it is not reasonable for an officer to use and rely on Google Translate to obtain consent to a warrantless search, especially when an officer has other options for more reliable translations.

[The] transcript from [the officer’s] in-car camera supports defendant’s claim that he did not understand many of his questions, and the Google Translate translation allegedly used by [the officer] was not a precise translation of “Can I search the car?”

As these presidential candidates have learned the hard way, Google Translate is not as reliable as it may seem. Never use online translation technology for more than single words and very simple phrases. Always, always have qualified translators review material, especially for a presidential campaign.

The consequences of incorrect translations can be both severe and highly embarrassing to say the least.

Read some of Bruce Adelson’s other blog posts to learn about more developments in language access law, and be sure to contact us if you’re interested in a consultation about your own organization’s compliance with federal language access law. For other funny and embarrassing Google Translate Fails, check out this blog post.

© Bruce L. Adelson 2018, special for Bromberg, All Rights Reserved The material herein is educational and informational only.  No legal advice is intended or conveyed.

He most recently taught at Cornell University.

ADA Discrimination Does Not Guarantee Liability for Money Damages Are Your Exams Ada Compliant? If Not, Beware!

2019: A Massive Year of Litigation for the Americans with Disabilities Act

This site uses Akismet to reduce spam. Learn how your comment data is processed.